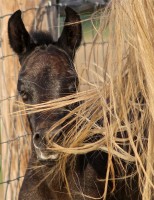 (Imperial Baarez and Imperial Safilla), pictured, with her 2015 filly by Phantom PR, also Dahman Shahwan in strain, to Farida.

This filly, is pure in family Dahman Shahwan, with both sire and dam being Dahman in strain.